Water resistant claims are heavily emphasized in marketing campaigns for today’s most popular smartphones and fitness trackers. But how trustworthy are their claims? As with any new technology purchase, it’s important to delve beyond the pretty packaging and assertions,  and get down to the facts.

Every component of your device (ports, speakers, button, microphone, camera, etc.) is a potential weak link that could allow water to intrude upon and damage places that are not fully protected. It’s important to note, that no smart phone claims to be waterproof, merely water resistant. Any reputable manufacturer who makes water resistant claims, backs up those claims against an internationally recognized standard- the IP Code Rating System. The testing standards the IP Codes are based upon, are important to understand. Some users have discovered the hard way that water-resistant claims were based upon fresh water standards, and not salt water or other chemically treated liquids.

When companies say their device is water resistant, they are essentially stating that their device(s) was able to withstand a certain amount of water, for a certain amount of time. The International Protection Marking, or IP Code (aka ingress protection) that results, describes the degree of protection that is provided against intrusion. Intrusion is defined in most cases as dust and water. The code consists of two numbers. The first marks how resistant to dust getting it into the inner workings of the device (given a numeral of 0-6), the second shows how resistant to water the device is (given a numeral of 0-9). 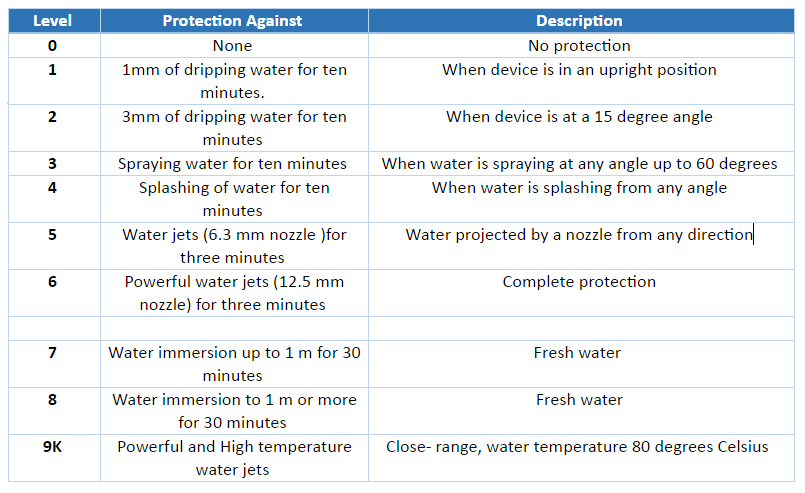 Water pressure will also effect a device’s water-resistance level. Unfortunately there is no universal testing method for water pressure’s impact on smart devices, so the real-world usage may vary from device to device.  Typically water pressure is measured in ATM’s (stands for atmospheres), and is then converted to water depth. Each ATM is equivalent to 10 meters or about 33 feet of static water-pressure.

These rating were performed in lab controlled environments while the smartphones were in standby mode. The testing environments and therefore the ratings do not reflect the water resistance of the fitness tracker bands. Laboratory environments are not exactly the same conditions as wearing it in everyday use. This could be why that despite IP ratings, neither Apple or Samsung cover devices in their warranties for water damage. Nothing screams, “Buyer Beware!” quite like companies that advertise their product as being water resistant and then don’t back up the claim with their warranty.

Speakers and microphones are particularly susceptible to water damage since they aren’t completely sealed. Both depend on air entering and leaving the device (creating vibrations in air is how they produce sound) and depending on the amount of pressure that is applied, water may be let in. It’s likely that future versions of smart devices will improve their water resistance level.

However, for now, using your device for long periods of time, or subjecting them to heavy impacts, high velocity water, or using them in steam rooms or saunas is still not recommended. Some manufactures even have special recommendation for how to treat the devices after exposure to water. Sony says you need to rinse of any chlorinated water with freshwater afterwards to prevent rust or other water damage.  While the i-Watch Series 2 comes with a water eject mode that will remove any excess water away from the speakers.

(image via flickr/Paper of Light)